Title: And Then What? 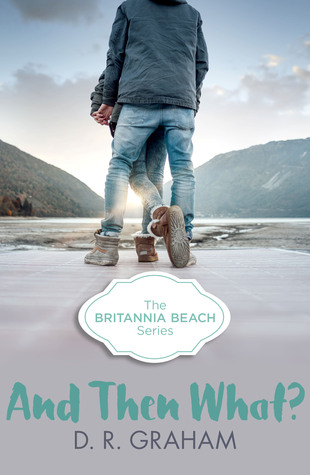 Juggling assignments and missing her old life in Britannia Beach, Derian Lafleur’s first year at university has been overwhelming to say the least. A sun-filled, all-expenses-paid, spring break getaway with her best friend, Sophie Sakamoto, is exactly what she needs. Or so she thinks…

Until the last person in the world Derian expected to see shows up at the Acapulco resort, and her already stressful life suddenly becomes a million times more complicated. When the girls’ spring break takes an unexpectedly dangerous turn, they find themselves lost and injured in the Mexican wilderness, and Deri is the only hope they have for getting out alive. If only she can figure out what to do next.

I’ve loved the Britannia Beach series, they’re not that known but they’re really cute and swoony. So when I started reading the third book, I was full of expectations, but they didn’t come true. At least when it comes to the story line. I’m sorry Danielle, but I didn’t like the third book as much as I love the others.

As I just said, that’s mostly due to the storyline. It has nothing to do with the writing style because that was just as always great. The storyline and how the characters were acting around that, bothered me beyond extent.

First, we start off with Derian and Trevor being in a relationship, which I diehard ship. They’re goals. But I started to get irritated by Derian, being extremely jealous when Trevor was just being himself: helping others and being loyal. I just couldn’t understand how Derian could be fine and the other moment is so jealous. It bothered the hell out of me.

So, when she suddenly got on a trip with Sophie to Mexico, and suddenly run into Mason, I couldn’t be more than angry. I don’t know, but since the last book I kind of created a grudge to Mason and I just hate the guy. So when he was suddenly there, being all overly sweet to Derian, I just couldn’t handle it. I literally wanted to throw my e-reader across the room (which wouldn’t be a great idea, since I’ve only got it for a few days).

But that wasn’t everything because Mason constantly flirted with Derian even though he knew she got a boyfriend: Trevor. I just couldn’t take it, I was so damn angry. I even got a quote that can explain why I was so angry:

“You were clear. You love Trevor. I respect that” He stood with his tray. “I just want to enjoy the time we do have together – as friends.”

He’s saying it to Derian, but totally doing another thing. Mason, just back the hell away from Derian. SHE’S TAKEN BY OVERLY GORGEOUS AMAZING TREVOR!!

Another thing annoyed me was Derian. She was saying she was with Trevor, but she totally fell for Mason, even though she said they were just friends. I read from her point of view and even though she hasn’t said it, I know her and I just know she still has feelings for Mason. Which totally aggravated me more because she was with Trevor. I was like: Get you shit together!!

As you see, I was totally on Trevor side the whole time. So when Trevor said this:

“It’s my fault he left. I shouldn’t have been affectionate with you in front of him.”
“I’m your boyfriend, Deri. He needs to get over it.”

So. I feel like this review isn’t a real review but more like a rave about me being annoyed the whole damn book, but oh well, I don’t know how to explain it otherwise. I’m glad I read the book, because I got to see more of Derian and Trevor being in the relationship and how other things continued, but I’m just not happy with the way it went.