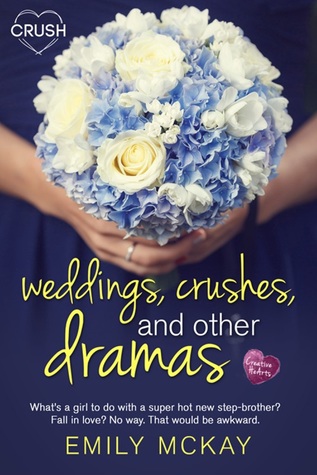 Falling in love with the best man wasn’t on the program.

Willa is happy to be the maid of honor in her dad’s upcoming wedding to uber-celeb Mia McCain. Not as happy about the best man being her soon-to-be stepbrother, the infuriating—and infuriatingly gorgeous—Finn McCain. Every time their paths cross, the attraction simmering between them grows a little harder to ignore. Willa knows all about guys like Finn—they only want what they can’t have. What’s between them isn’t real.

Finn has never felt anything more real than what’s developing between him and Willa. Sure, her dad warned him to steer clear, but it’s not just about forbidden temptation. He’s determined to prove to Willa he’s not going anywhere—and that happily-ever-after will always be worth the risk.

A lot of you guys know I’ve been out of the book world for a while. I didn’t know (I still don’t know actually) about new books and so I also didn’t know about the new Willa and Finn book: Weddings, Crushes and Other Dramas. On Sunday I found this out and I totally freaked. I had to get the book! So I bought it (as easy as possible: of course the ebook) and there I went. I got started in the book and I read it in just two days. Which is actually pretty quick for someone who just got out of a really bad reading slump. And now I hope I still got it in me – writing good reviews.

It looked like the book fast forwarded through a couple of weeks. I remember How Willa Got Her Groove Back ending with the whole family moving into their new house (or at least, new for Willa and Matt since it’s actually Mia’s house). Weddings, Crushes and Other Dramas started off with the whole family having dinner, discussing about planning the wedding. I didn’t know Matt and Mia would actually marry this soon, but hey, I love a wedding so if they’re ready I’m ready!

The biggest thing that was different from HWGHGB, was that both characters (Willa and Finn) have grown so much. They both act way more as adults and both in their very own way. Willa is actually very open-minded and isn’t as irritating as she sometimes was in the first book. Finn really outgrowns his old-self, and really respects girls this time around.

While the sexual tension between Willa and Finn was of the charts, I kind of got worked up about it sometimes. The only thought that went through my head, like literally the whole time was: ‘JUST KISS/GET TOGETHER ALREADY!’. So when they finally were honest about their feelings my swooney heart was satisfied. I can go to sleep peacefully.

The only thing I didn’t actually like about Weddings, Crushes and Other Dramas is some of Willa’s friends and the way they’re acting. I got really frustrated by her friends. Okay, Damien really is a douche, but do they have to be so rude to him? I don’t get it. If Willa actually was really happy with Damien, why not respect her feelings?

So I know, this review is kind of short but hey – give me a break! I’ll promise I’ll get better in time – maybe even get better than I was. I am really glad I decided to read this book immediately and I’m glad about the ending. If you want to read a contemporary with a very swooney connection between both characters, you should definitely pick this series up.

So, what book should I read next? Leave a message in the comments!

One thought on “Weddings, Crushes and Other Dramas by Emily McKay”