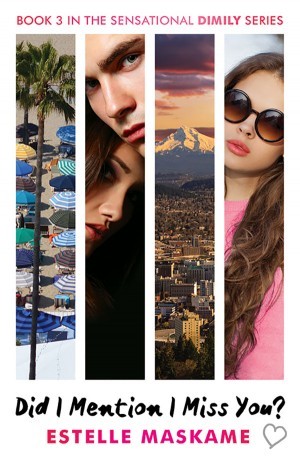 Title: Did I Mention I Miss You?
Author: Estelle Maskame
Series: Did I Mention I Love You? #3
Genre: Young Adult/Romantic Contemporary
Publisher: Black and White Publishing
Publication: July 21th, 2016
Pages: 408

Eden’s on her way back to Santa Monica for the summer, and she hasn’t seen Tyler since the devastating fallout of their forbidden relationship. Eden claims to have moved on—but Tyler wants to rekindle the flame.

He convinces Eden to visit his new home in Portland, Oregon, where he has set up a center for troubled teens. Eden’s proud of what he’s built, but the last time they were together, it nearly destroyed Eden and their family. Then a tragedy draws them together, and Eden must search her heart and decide if Tyler is worth the risk once and for all.

Did I Mention I Miss You was one of my most anticipated reads of 2016 and when it released I instantly bought the ebook (and the physical copy of course) and started reading it. Unfortunately, I got into a reading slump the next day and that one lasted for one month. It was upsetting, but I’m glad I finally got to read it.

When I started reading Did I Mention I Miss You, I didn’t have any problems getting used to Eden again; it was pretty easy actually. In DIMILY and DIMINY it was easy for me to read from Eden’s perspective and while I couldn’t particularly relate to her, I felt a deep connection. And I could feel that connection when I was reading DIMIMY too. It’s unique to have such a special bonding with a character

And when we’re talking about characters, let’s talk about Tyler. Because he totally amazed me – throughout the whole book. Comparing him with his nineteen year old self (DIMIMY) or even his seventeen year old self (DIMILY) he has grown so much. His character development and personality change totally did it for me. I actually really hated Tyler in DIMILY, but I must say.. he really is a grown man in DIMIMY. I’ve never seen such a development and I loved how he turned out to be.

I was really skeptical about the whole Tyden drama when I started reading DIMIMY because I was so shocked about the ending of DIMINY. I totally gave up on them since then, so I didn’t really know what to expect from DIMIMY. I was also very skeptical about Eden’s feelings; being so freaking mad to Tyler but still having feelings for him. In some kind of way it wasn’t realistic in my point of view.

I loved that they went to Portland this time. It’s a new city to discover (at least for me, it wasn’t for Eden and Tyler) and I liked to read about something different than the good old Santa Monica. I liked the way Estelle described all the surroundings; it was detailed, but not that detailed and that balanced it out perfectly.

One thing I miss in Did I Mention I Miss You is the original casting. Sure, it’s most likely groups fall apart (I also saw it happen in real life) but I just missed the whole group. Their adventures, their parties.. it felt like I missed a small part of the story because of that. Overall, I do like the new group. They’re all on the same page and just nice to each other (I don’t know how to describe it another way)

The thing that disappointed me the most in Did I Mention I Miss You was the drama. Let’s be honest, DIMILY and DIMINY are full of drama (you guys all know how much I love drama) and I missed that in DIMIMY. It kind of had an anti climax feel to it and I pity that. I don’t want to spoil, so I’ll keep it vague, but one thing happened and I expected something big and dramatic to happen, but it didn’t. It just didn’t. Even the ending wasn’t full of climax or that dramatic and it didn’t make it memorable at all. And I just feel sorry for it.

So overall, I really liked this book. It was easy to read and I loved the character development and the writing. The only thing I didn’t like was the ending and the anti climax feel. So that’s why I give it four stars.

3 thoughts on “Did I Mention I Miss You? by Estelle Maskame”