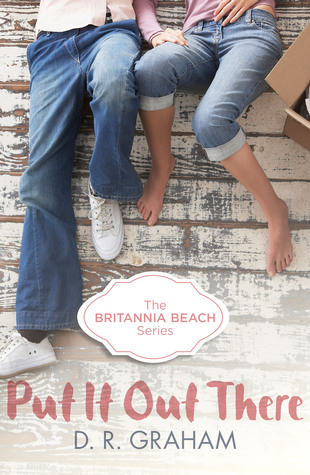 I received an eARC from the publisher through Netgalley in an exchange for an honest review. All opinions are my own.

Returning home to Britannia Beach a year after her life was shattered is bittersweet for Derian Lafleur. Although some things settle back into place, others don’t click like they used to…especially her friendship with Trevor Maverty.

Derian suddenly wishes the boy next door would see her as more than just a kid sister type. She tries to be everything she thinks he’s looking for―bolder, more experienced. But is that who she wants to be?

With the fate of her family’s historic inn on the line and Trevor making life more complicated by the day, Derian struggles to manage her unexpected feelings, and deal with a past she’s not quite ready to leave behind.

Let me tell you, I dived into this book with not as high expectations as others maybe would but I’m glad I did because it totally amazed me. I literally didn’t expect it to be so good!

The main character is Derian and we read from her POV. And first off I really have to say something about her name because wow, I love it! It’s so special and it really suits her. Okay, without further a do, let’s get into the review. Derian was funny. Not funny like wow, you make a lot of jokes but funny in a way that she makes me laugh with her sayings. The sweetest thing about it is that she doesn’t even know it herself.

There was also this other thing about Derian which was quite special; she was kind of paranormal. Well, I wouldn’t say paranormal, but I don’t know how to put it another way. She kinds of has these short visions and that also made it this book a little more special.

The story was original and unique. There was tension and a hell lot of drama and everytime I thought what was going on, Danielle took another turn and I was amazed. Everytime.

Also unique about this story is the best friend to lovers concept (well kind of) because we’re following Derian’s story and that’s falling for her best friend Trevor. The thing Danielle did really nice here was they way of describing it, it was so detailed and I could really feel Derian. It felt like I was walking in her shoes. I could totally feel her hightest highs, but also when she had her lowest lows. I cried so hard when the sad things happened.

And damn, Trevor! He really was the best best friend ever but he also was so protective over Derian and the way he spoke to her.. it made me have goosebumps!

After all, I’m really glad I’ve read this book and I’m so happy that there’s gonna be another book! I will definitely make a Waiting On Wednesday about it and I can’t wait until it releases. I have to know the ending!!

3 thoughts on “Put It Out There by D.R. Graham”